Merry Christmas and a Happy New Year to one and all. Since my last post I've continued to concentrate on sculpture. Sergeant Kris Battles, our other combat artist, deployed to Iraq in September and returned unscathed mid-November after 2 months with the very first Marine Osprey squadron to be fielded to a war zone. Sergeant Battles and I are now working out of a large and well equiped formal studio, north light and all, aboard Quantico.

My lovely girlfriend Janis and I will be spending Christmas Day with family in Pennsylvania.

My current project is a full figure of a Marine machine gunner. Several critical parts of the work, such as head and hands, are being done in wax. The 240 G machine gun is roughed out in balsa wood and hard wood dowels and will get a coat of wax. The remainder of the sculpture is in plasticine. The final product will be cast in bronze. 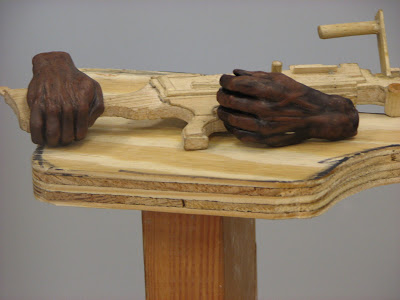 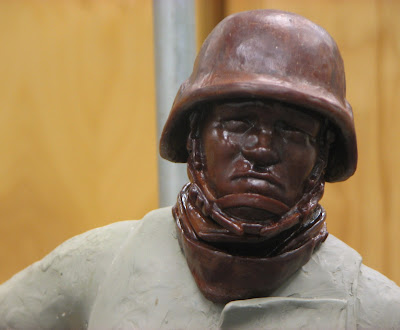 I leave you with a Christmas poem penned by a Marine. The poem was originally written by Lance Corporal James A. Schmidt in 1986. I also invite you to visit Major Mike Corrado's On My Watch Tonight YouTube site.

'Twas the night before Christmas; he lived all alone
In a one bedroom house made of plaster & stone
I had come down the chimney, with presents to give
And to see just who in this home did live.

As I looked all about, a strange sight I did see
No tinsel, no presents, not even a tree
No stocking by the fire, just boots filled with sand
On the wall hung pictures of a far distant land.

With medals and badges, awards of all kind
A sobering thought soon came to my mind
For this house was different, unlike any I'd seen
This was the home of a U.S. Marine.

I'd heard stories about them, I had to see more
So I walked down the hall and pushed open the door
And there he lay sleeping, silent, alone
Curled up on the floor in his one-bedroom home.

He seemed so gentle, his face so serene
Not how I pictured a U.S. Marine
Was this the hero, of whom I'd just read?
Curled up in his poncho, a floor for his bed?

His head was clean-shaven, his weathered face tan
I soon understood, this was more than a man
For I realized the families that I saw that night
Owed their lives to these men, who were willing to fight.

Soon around the Nation, the children would play
And grown-ups would celebrate on a bright Christmas day
They all enjoyed freedom, each month and all year
Because of Marines like this one lying here.

I couldn t help wonder how many lay alone
On a cold Christmas Eve, in a land far from home
Just the very thought brought a tear to my eye
I dropped to my knees and I started to cry.

He must have awoken, for I heard a rough voice
"Santa, don't cry, this life is my choice
I fight for our freedom, I don't ask for more
My life is my God, my Country, my Corps."

With that he rolled over, drifted off into sleep
I couldn't control it, I continued to weep
I watched him for hours, so silent and still
I noticed he shivered from the cold night's chill.

So I took off my jacket, the one made of red
And covered this Marine from his toes to his head
Then I put on his T-shirt of scarlet and gold
With an eagle, globe and anchor emblazoned so bold.

Tho' it barely fit me, I swelled with pride
And for one shining moment, I was Marine Corps deep inside
I didn't want to leave him so quiet in the night
This guardian of honor so willing to fight.

Half asleep he rolled over, in a voice clean and pure
Said "Carry on, Santa, it's Christmas Day, all secure."
One look at my watch and I knew he was right
Merry Christmas my friend, Semper Fi and goodnight.

Merry Christmas to you and yours. Wish you a successful and safe 2008.
V/R Jim West

Season's Greetings to you and yours, Mike.

I still love your work. Continuity is so important in this life.

Merry Christmas to you and all those brave men and women who work so hard and so far from their families and loved ones at this time of year!! May you stay safe!!

Your work on the gunner is amazing. I was routed to your site from Jo Castille's site. I'm glad I came over to look.

And a belated Happy New Year! I hope the holidays were good to you and for you!